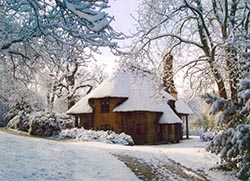 Our client, an anglophile with an Estate in Oxfordshire, was looking for something to set his landscape off further, some kind of Folly he thought, in the best of English landscape tradition.

What came instantly to our minds was ‘Swiss Cottage’, a genre of pavilions that England’s landowners have been erecting in their gardens since the 17th century.

Designed in the English ‘Picturesque’ tradition - a rustic style - with a thatch roof, decorative chimney-stacks and a tree-trunk verandah. The interior usually contains one large reception room and some subsidiary service accommodation. These buildings often act as visual ‘incidents’ in the planned landscape and provide a place to visit for picnics, shooting party lunches and other entertainments. It’s a tradition that was perfected by John Nash, the Wyatts and Humphrey Repton in the late 18th and 19th centuries.

Repton had designed the Thornberry in Woburn park for the 6th Duke of Bedford in the early 19th century, built of thatch and tree trunks over a tiled basement kitchen. The Duke also commissioned Jefrey Wyatville in 1815 to design ‘Swiss Cottage’, a thatched timber pavilion with a double verandah in the grounds landscaped by Repton on the banks of the river Tamar in Devon, as a place for picnics and a viewpoint. John Nash however not only perfected the genre in Windsor Great Park for the Prince Regent, but built was is arguably the finest achievement of this type in 1817 on the Cahir Estate in Ireland for the Earl of Glengall, as a retreat from the castle there.

With Royal patronage, this building style became established and is know as ‘Swiss Cottage’ because of its connotations of unspoilt nature as in the ‘Swiss Family Robinson’.

Backed with the worthy lineage and armed with planning permission, our client enthusiastically pushed the button. Not long after his pavilion appeared in his landscape - looking like it had always been there. Crafted very much in the 18th century tradition, our pavilion has a sculpted thatched roof, a couple of decorative brick chimneys, lime rendered walls, patterned casement windows and of course a tree-trunk verandah.

The building cleverly hides its size. Although comprising a big sitting room with a galleried bedroom and big bathroom, it containes a kitchen and a huge basement completely out of sight. Within this, there's a room for the bodyguards, a staff kitchen as well as the infrastructure and systems to run the builing - including boilers, air conditioners, machinery room and security facilities.

It’s a beautifully built fun building that not only acts as a focal point in the landscape, but one that’s been proved to be a useful addition to the Estate as a base for contemplation and relaxation. It even appeared as the Estate’s Christmas card.

Our client loved the idea of rowing across his lake to his hideaway cottage. 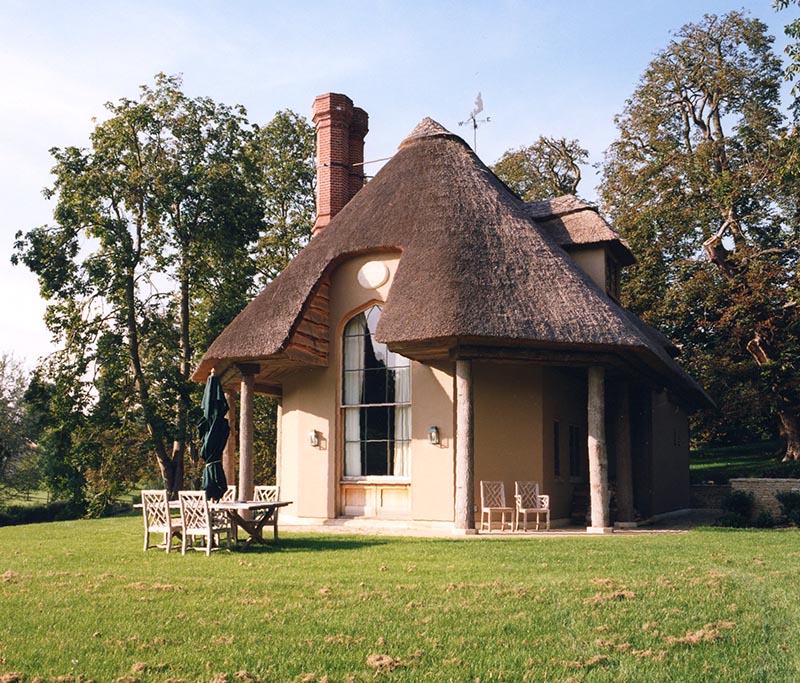 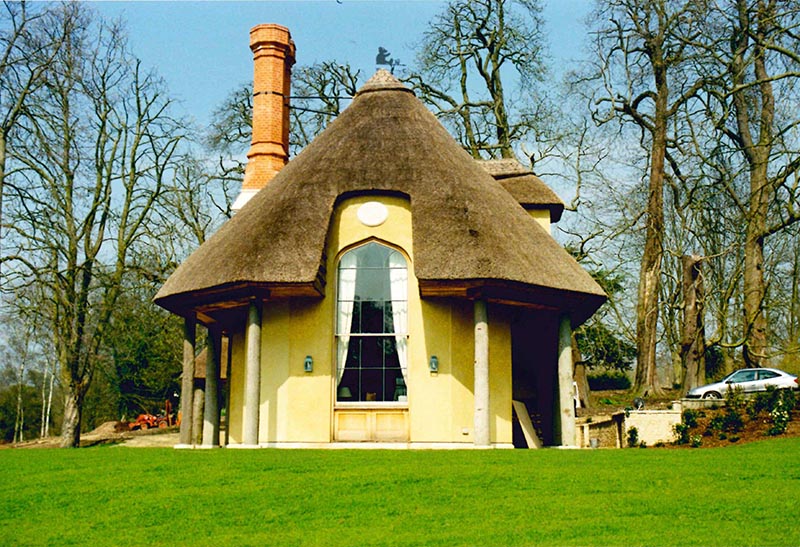